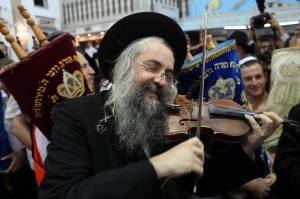 Shavua Tov! Are you just logging back on after 3-day Chag? See here for some important news stories you might have missed >>> http://bit.ly/ZzKSgi

Jerusalem, Israel, September 21, 2014 — A rare cache of Byzantine-era antiquities discovered in 2013, including the largest gold medallion with Judaic symbols known in existence, are on public display for the first time in a focused exhibition at The Israel Museum, Jerusalem. Among the archaeological finds on view—all of which were packaged in two cloth bags — are  gold coins and silver and gold jewelry, in addition to the sizable medallion, measuring four inches in diameter. The treasures were found in a Byzantine period public building near the southern wall of the Temple Mount during excavations led by Dr. Eilat Mazar, of Hebrew University’s Institute of Archaeology, together with a team from Oklahoma’s Ambassador College.

The unique medallion has, in its center, a menorah (seven-branched candelabrum). On the left is a shofar — the ram’s horn traditionally blown on the Jewish New Year and Day of Atonement, and on its right, an unidentified object – possibly a bundle of myrtle, willow and palm branches, being three of the four species used during the Sukkot holiday and common Jewish symbols of the period, or perhaps a uniquely-fashioned Torah scroll of unknown design from this period.

“We are pleased to be displaying this rare Byzantine treasure to the public for the first time,” said James S. Snyder, Anne and Jerome Fisher Director of the Israel Museum.  “Although much remains unknown about the use and significance of these artifacts, they are undoubtedly among archaeology’s most exciting recent finds. They are now on display in the Holy Land Gallery of our Archaeology Wing, which is devoted to the concurrent development of Judaism, Christianity, and Islam during Byzantine times, strengthening the Museum’s narrative of the early chapters in the evolution of the world’s three main monotheistic faiths.”

The unusually large size of the medallion raises important questions about its use. Some scholars believe it was used to decorate a Torah or piece of furniture, while others argue that it was simply a large ceremonial ornament. Like many finds from this period, the medallion’s combination of symbols reflects the timeless notion of  Jewish yearning for the restoration of the Temple, destroyed by the Romans in 70 CE.

One of the two cloth pouches in which the hoard was found held thirty-six gold coins, decorated on one side with portraits of Byzantine-era emperors over a period of 250 years, together with their names and titles; on the back there are crosses or images of gods. The latest coin is dated 602 CE, indicating that the cache was hidden at the beginning of the 7th century, possibly during the Persian invasion of 614 CE.

The special exhibition of the hoard is made possible by Meredith Berkman and Daniel Mintz, New York, who also supported the hoard’s excavation, and curated by David Mevorach, Senior Curator of Hellenistic, Roman, and Byzantine Archaeology.